Populations are the data source of members for a communication. Each communication must have a population defined.

Populations can be sourced from one of the following population types:

Each line can contain a comma-separated list of email address (toAddress) and name (toName). If only one value per line, that value will be assigned to the toAddress attribute.

Each line can contain a comma-separated list of various attributes with the first line defining the fields. One or both of the fields "toName" or "toAddress" should be in the population. 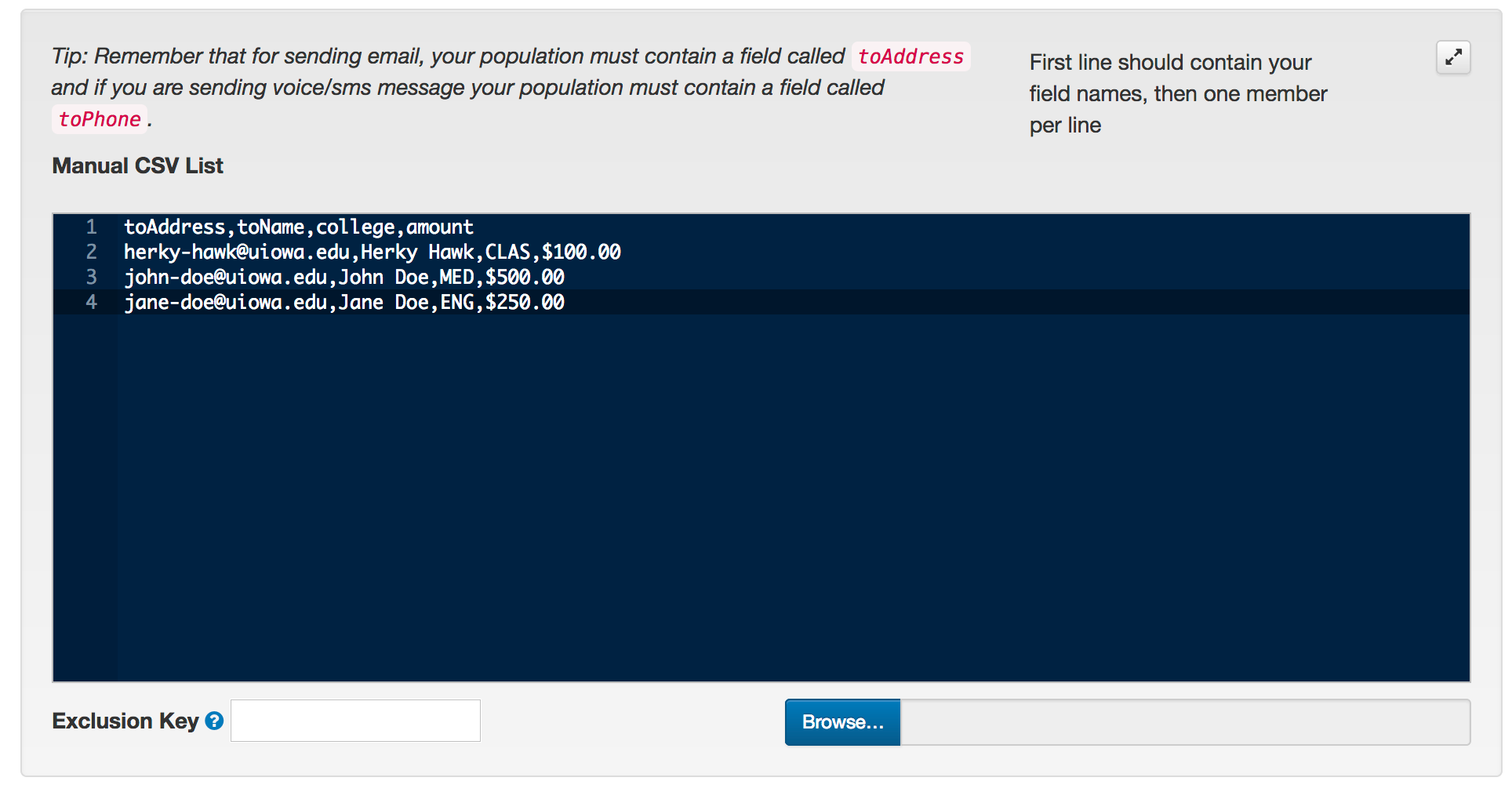 Database queries can be made against configured databases. Currently, Dispatch is setup to connect to DWPROD and Dispatch's internal database. If other database connections are needed, please contact the Dispatch administrator. In order to connect to the database, credentials must be used. These credentials are assigned to the Dispatch client and can be shared amongst populations. The saved credentials should match against username/password combinations on the target database.

Please keep in mind that for Oracle queries, columns are returned all in uppercase so your templates will need to reference the attributes in uppercase. 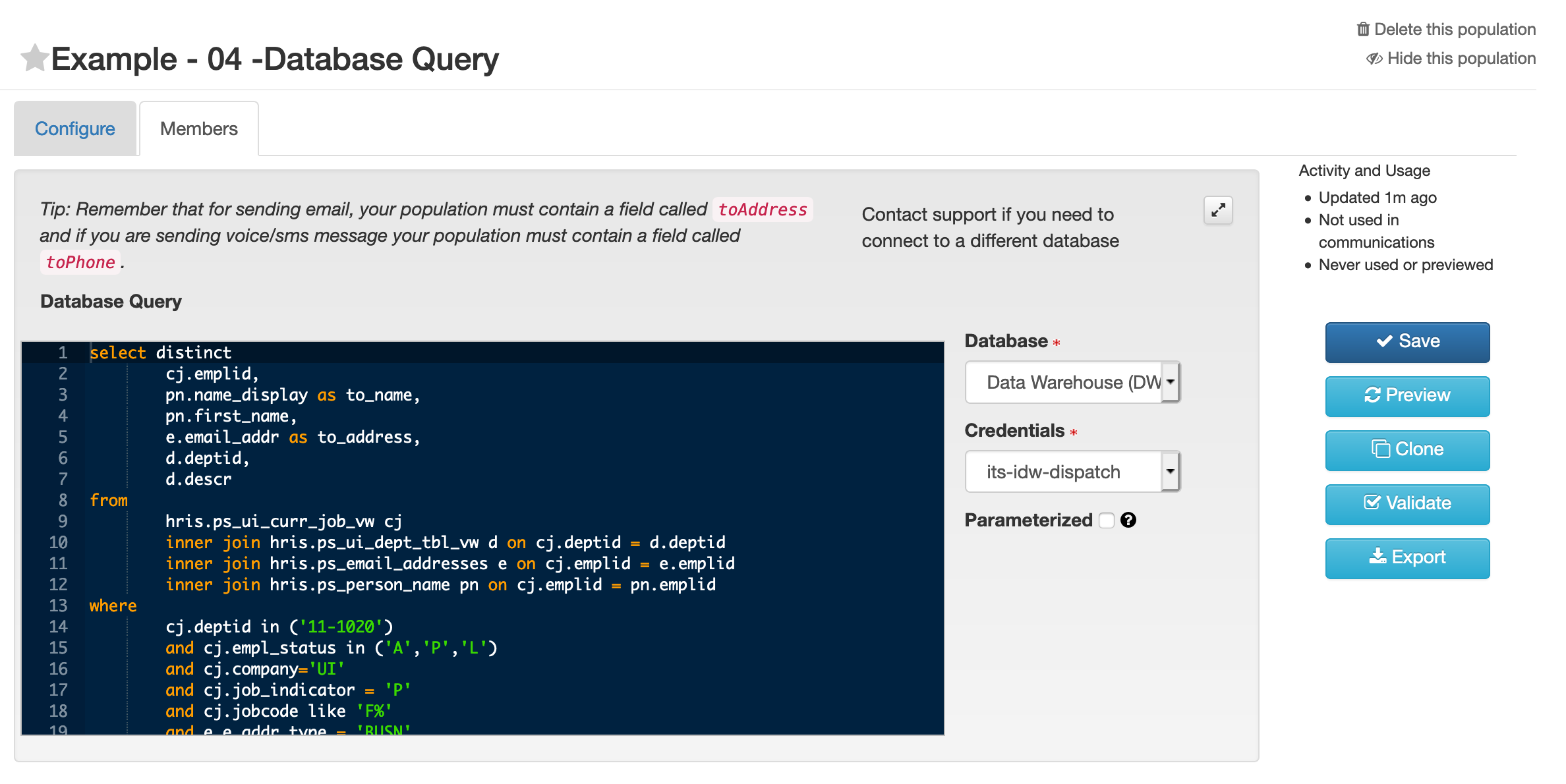 Dispatch can consume a JSON array returned from a web service call to an external application. Applications must reside within the data center networks. Basic Auth is used to access secured web services by choosing a Saved Credentials.

Predefined populations are an easy way to get at typical large populations like Faculty, Staff, Undergraduates, etc. You can select from a list of common identity attributes. The attributes email (mail) and name (displayName) will always be returned even if you unselect them. Only people with valid @uiowa.edu email addresses that have mailboxes setup will be returned in a Predefined Population.

Dispatch will query the Identify Warehouse based on preset rules that describe those populations.

You can filter the groups further by specifying gender, class year (if applicable for the college), or if the person is of legal age or not. 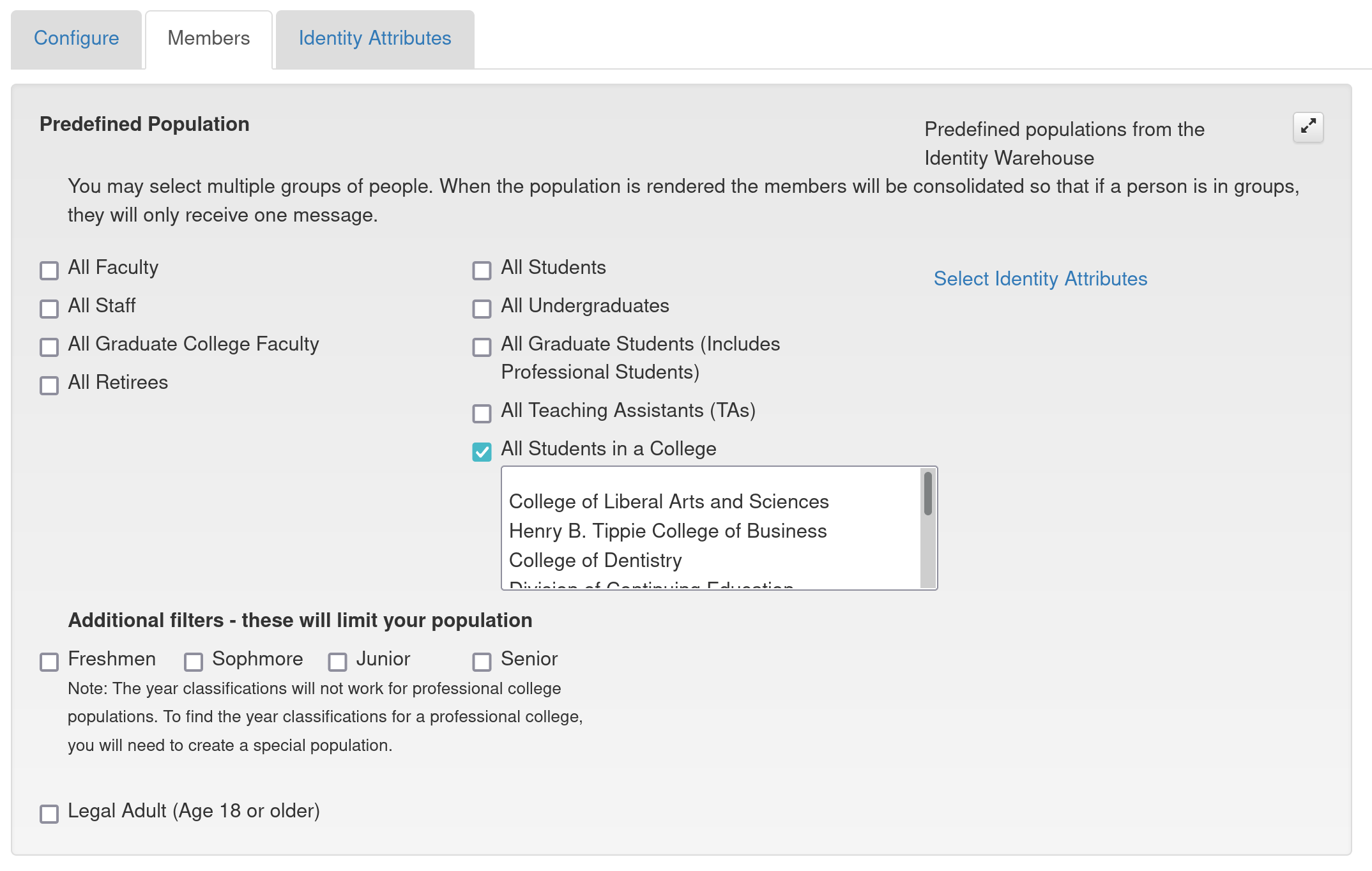 If you are going to use the Ad-Hoc API to push data into a Dispatch communication, you need to create a population to act like a place-holder. When you push member data into Dispatch, it will need to be a JSON array of members like such:

You can construct a population based on the membership to a group in Active Directory. The group can be in either the IOWA or HEALTHCARE domain and the Active Directory object that has membership in the group must be a person that can be located in the Identity Warehouse. Membership in any nested groups will also be resolved, but only distinct members will be returned so there should be no duplicates. Like other population types, you can select which attributes are returned from the Identity Warehouse.

You may have multiple populations that you want to combine into a super list so you can contact more than one list with a single communication.

Unique Key: All members of a population have keys (aka columns or attributes) that are associated with each member. When you combine populations there is a good chance you will have duplicates. By providing the key that identifies the uniqueness of each member, duplicates can be removed. The default unique key is toAddress.

If a message is excluded it will appear to be struck through when you view the members of a communication. 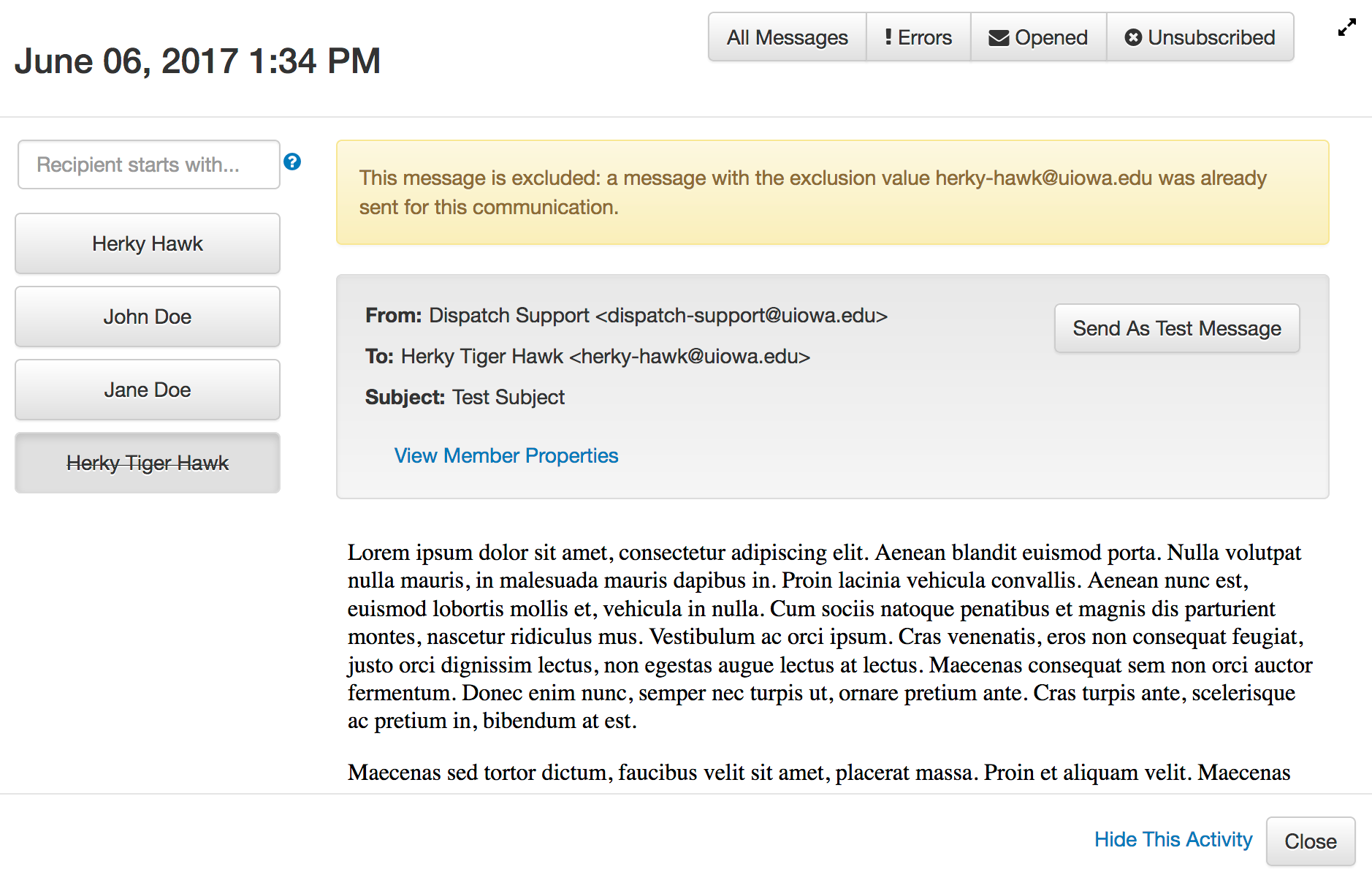 * indicates the attribute is included in the default selection of attributes.

Any addresses that fail validation should be removed from the population. The population will be validated when the batch members are generated. Validation failures will be recorded as delivery errors.

Cloning a population will make a copy of the population.

You can export the generated population as a CSV file with all the attributes present.

You can add parameters to your population to prompt the content creator to supply a value that is provided to either a Database Query or Web Service Call population. This is helpful when you have a population and it needs to fetch a unique membership based on a changing value. In order for your SQL (for a Database Query) or URL (for a Web Service Call) to be parsed for queryparameter tags, you must check the Parameterized checkbox. 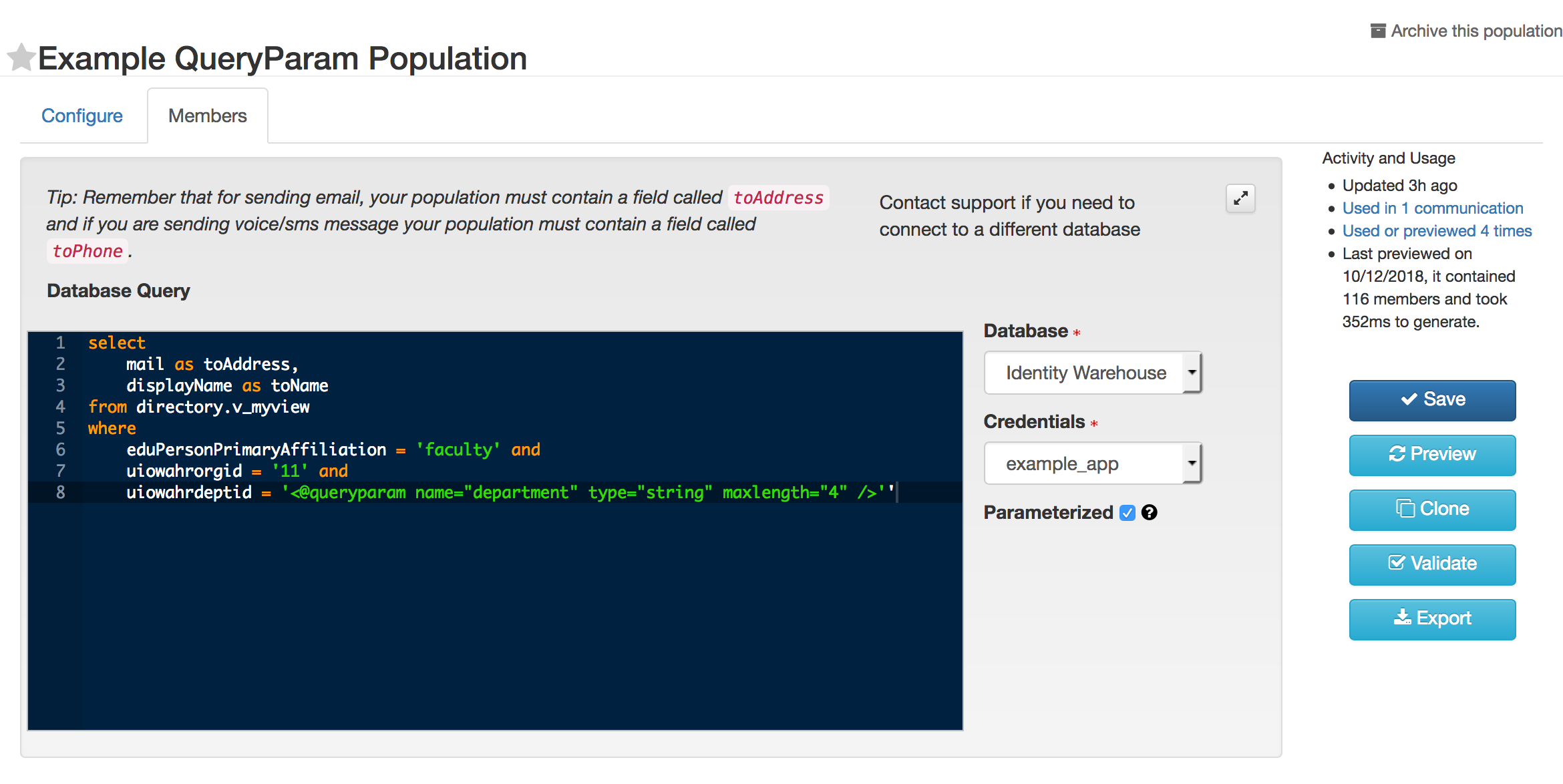